New Industry represents over two thirds of the Basque GDP 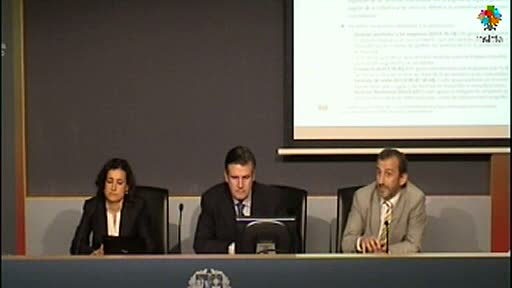 The position of the Basque New Industry (69%) exceeds the EU-15 community average (66%) and is significantly higher than the Spanish average (56%).

More than one in two people (57.3%) are working for the so-called New Industry in the Basque Country, which means it employs over 563,000 people.

The Basque Government has commissioned a study to establish the real weight of the so-called New Industry. Apart from the manufacturing industry, this new concept includes production-orientated services.

The Basque Country, which only represents 4.6% in terms of population and 6.1% of the GDP within Spain, accounts for 9.3% in the industry sector.

The Basque Country was among one of the first regions of the European Union to commission an significant study on the situation of New Industry. The Basque Government's Minister for Industry, Innovation, Trade and Tourism, Bernabé Unda, accompanied by the Deputy Minister for the Cabinet, Planning and Strategy, Pedro Gómez Damborenea, and by the Director for Planning and Strategy, Inmaculada Freije, unveiled the conclusions of this study, which has concluded that New Industry represents over two thirds (specifically, 68%) of the Basque GDP.

The study was based on initial research carried out by the European Commission back in 2003. The EU report noted how industrial companies had outsourced some service activities that they used to perform themselves. The aim was to obtain those services in a competitive market or achieve greater flexibility.

That situation led to an expansion of the business-related services, as well as its explaining the transfer of jobs from industry to the services. These production-orientated services (which include electricity, gas and water, traditionally in the industrial arena in its strictest meaning), along with the manufacturing industry make up a hypersector that is now known as New Industry.

Basque industry accounts for over 9.3% within Spain as a whole, while it only represents 4.6% in terms of population or 6.1% of GDP.

The Minister for Industry, Innovation, Trade and Tourism highlighted the key data and conclusions of the study. Bernabé Unda pointed out that the Basque Country, in addition to remaining at the top in industry, also holds a key position when compared of benchmark European regions in terms of incorporating services to production.

Industry: among the top 5 in Europe

Out of the 22 regions selected for the study, which are close in terms of economic development and population (all of them from countries from the EU-15), the Basque Country is among the top five of a list headed by Upper Austria, when it comes to industry. If production services are also taken into account, the Basque Country is in the middle of the table.

According to the report, the weight of New Industry within the Basque economy (69%) is better than the EU-15 community average (66%) and is significantly ahead of the figure for Spain as a whole (56%).

Bernabé Unda stressed the importance and need for the Basque Country to continue developing competitively, as New Industry provides employment for 57.3% of Basques, over 563,000 people.

The Minister ended his speech by stressing the commitment to industry of his whole Department throughout our term in office: "Industry, either directly or indirectly, is the driving force of our economy, the guarantee of Basque wellbeing and quality jobs," he stressed. "We have focused our policy on three strategies: Withstanding, Competing and Leading. I believe that the figures speak for themselves and show that our policy is the right one".

The Minister emphasised that there are countries such as the USA and the United Kingdom that "have decided to embark on a reindustrialisation process as the path to wellbeing and generating wealth. That decision is not by chance".

He also added how "we all recall that time when there were gurus calling for the world to be turned into a society based exclusively on services". "The reality, however, is tenacious and shows that the services that make the greatest contribution are those that are driven by industry itself and that it is industry itself that generates greater wealth in society and, therefore, greater wellbeing by means of innovative products, with a high technological content.

The Minister explained that the Basque industry "is not immune to the international economic crisis and needs to be kept alive". "Throughout our term in office, we have defended and fostered this policy and we are now continuing to do so. It should be noted that the extraordinary financing plan, which has the capacity to mobilise over 2,000 million euros, aims to ensure that the financial crisis does not stifle our companies and their projects and their employment".