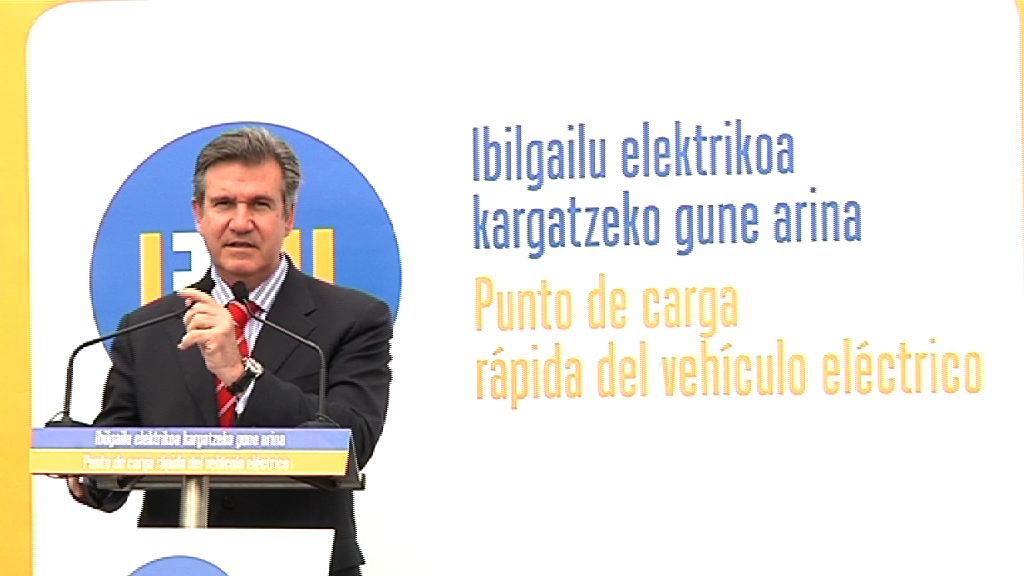 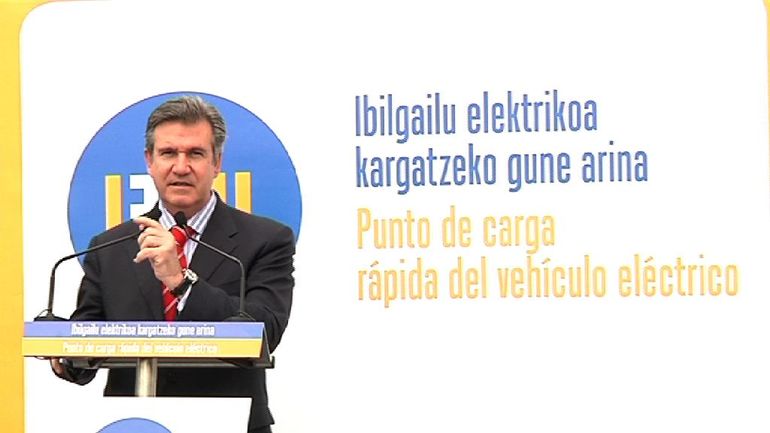 Download photo
Embed image
Ibil and Nissan begin to deploy the fast charging of the electric vehicle in the Basque Country Source: Irekia

The Basque Government's Minister for Industry, Innovation, Trade and Tourism, Bernabé Unda, opened the first facility of this type located at the Salburua Repsol petrol station in Vitoria-Gasteiz. The fast charge stations can top up the battery of an electric vehicle, such as the Nissan LEAF, in less than 30 minutes. IBIL will manage the fast charge stations remotely from its Control Centre and offer free charging to the users of the Nissan LEAF model for one year. The opening of the stations means that the fast charge infrastructure planned for the Basque Country is two years ahead of target.The deployment of the charging infrastructure for the electric vehicle in the Basque Country has take a significant step forward with the installation of the first fast charge point delivered by Nissan to IBIL at a service station belonging to the Repsol Group. This system will enable the battery of an electric vehicle, such as the Nissan LEAF, to be recharged up to 80% in barely 30 minutes.

Bernabé Unda, the Basque Government's Minister for Industry, Innovation, Trade and Tourism, along with Javier Redondo, Director of the Zero Emissions Project at Nissan Iberia, Enrique Monasterio, IBIL General Manager, and Iñigo Palacio, Energy Ventures Deputy Director at Reposl , opened the first fast charge station located at the Repsol petrol station in the Salburua neighbourhood of Vitoria. The Minister stressed that the coming into service of this fast charge facility is a turning point in the deployment of the electric vehicle in the Basque Country, as it will slash charging times, which will de facto increase the range and flexibility of these vehicles, which will further facilitate their implementation.

This new charge station is the first of a series of fast charging facilities to be deployed in the future at Repsol service stations throughout Spain as part of the agreement reached between Nissan and IBIL. Thanks to this agreement, the Nissan LEAF users will also be entitled to free charges during one year at the fast charge stations of the IBIL network.

Nissan is implementing its plans to set up a European fast charge network for electric vehicles by delivering 400 fast charge units. The aim is for these new strategically located points to boost the existing networks and provide the electric vehicle customers with a greater range and flexibility.

IBIL, the electric vehicle charge manager, which is jointly owned by Repsol and the Basque Government through the Basque Energy Board, is the first charge manager to opt for fast charging with nationwide coverage. Thus, and pursuant to the aforementioned framework, Nissan will deliver new chargers throughout this year that will be added to the IBIL network and come into service while ensuring the upmost reliability and quality for the customer. They will all be remotely managed from the IBIL control centre located at the BEC Tower in Barakaldo.

The fast charge reduces the charging times to around 30 minutes compared to several hours when using the standard charge at night. The installed units have a power of 50 kW and charge using the CHAdeMo protocol, a technology developed in Japan and whose name is, precisely, a play on words in Japanese that refers to the time that it takes to have a cup of tea. In fact, that is the time it will take for the electric vehicle to be charged and ready for you to continue on your trip. This technology is supported by numerous manufacturers of electric cars such as Nissan.

IBIL supplies 100% renewable energy with certificate of origin and the charge terminals use smart technology and are in permanent communication with the Control Centre to monitor the charges of the customers. IBIL is in charge of the electric installation, its implementation and legalisation, pursuant to current legislation. Further information on IBIL is available from www.ibil.es

About Nissan in Spain

Nissan has three production centres in Spain: in Barcelona, in Ávila y and in Cantabria, where it produces 4x4 vehicles, vans and lorries. The models include the Pathfinder and Navara 4x4 vehicles and the Cabstar and Atleon light lorries, along with the Primastar and NV200. vans. Nissan España also has an R&D centre for motors and development of light industrial vehicles, along with spare parts and unit distribution centres. The commercial HQ for Spain and Portugal is in Barcelona. In total, Nissan employs 4,700 people in Spain and produced 155,000 vehicles in 2011.

About the Nissan LEAF

Thel Nissan LEAF was the first mass-produced electric vehicle and was named the Car of the Year in Europe, the World and in Japan in 2011. It has already sold over 32,000 units worldwide since it was launched in December 2010, making the Nissan Leaf the world's best selling electric car. The CC motor produces 108 CV of power and 280 Nm of torque, sufficient to reach a maximum speed of 145 km/hour. The electric motor is powered by a lithium ion laminate battery developed by Nissan, with a performance of over 90 kW. Nissan LEAF was awarded five stars in the demanding European New Car Assessment Programme (Euro NCAP) tests. The Nissan LEAF comes fully equipped with air conditioning, GPS and backup camera for parking. The European production of the Nissan LEAF will begin in Sunderland in early 2013.

Electric Vehicle in the Basque Country

The Basque Government has set some ambitious targets in its 3E2020 Energy Strategy in order to introduce greater energy savings in the use of energy in the transport sector by that year. It also seeks to free this sector from the current dominance of oil as the practical sole energy source. The electric vehicle is therefore a significant improvement, as it provides a much more efficient technology from an energy point of view and diversifies transport energy sources. The target is for there to be between 41,000 and 43,000 electric cars on the roads in the Basque Country by 2020

This whole infrastructure is also an opportunity for the Basque technological business fabric, as it generates synergies with smart networks, storage technologies and the automotive sectors, where the Basque Country already has over 400 highly specialised companies for whom this technological development offers new market opportunities and for growth.