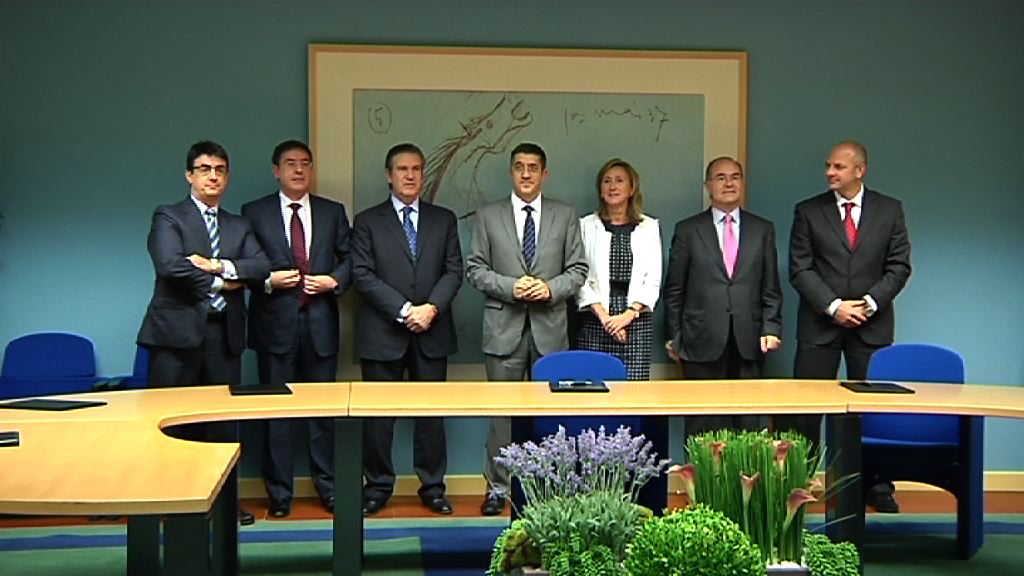 Lehendakari Patxi López, the Basque Premier, has signed a protocol with Euskaltel, Orange, Telefónica, Vodafone and Kutxabank which lays down the foundations for the ultrafast broadband. Thanks to this initiative, the Basque Country is three years ahead of schedulein its deployment of the 4G and next generation networks. "We are anticipating demand to ensure a competitive advantage for our citizens and our companies. Ultrafast broadband will place the Basque Country in a preferential position," stressed the Lehendakari. López announced the government's intention to implement a vehicle, "probably a company", to channel this project in the last quarter of this year

The Basque Country will place in a strong situation to deploy the next generation of networks three years ahead of plan. This is one of the main objectives of the protocol signed today at the Lehendakaritza, the Basque Premier's Office, by the Basque Government, Euskaltel, Orange, Telefónica and Vodafone, and also by Kutxabank.

During a ceremony presided by Lehendakari Patxi López, the five entities undertook to explore the most appropriate formulas to be a driving force for an investment vehicle over the coming months (which will probably mean creating a company), whose objective will be to extend the fibre optic infrastructure to population areas not considered in the business plans of the operators in the short-medium term.

This initiative is the fourth project of the "Leader Strategy" which is being implemented in the current term of office, after the agreement signed to develop the electric vehicle (with Mercedes and Repsol), the smart grids (with Iberdrola) and smart natural gas networks.

This further example of private-public partnership is part of the Basque Digital Agenda 2015, which will be approved in the Government Cabinet meeting next Tuesday and it will set the guidelines to turn the Information and Communication Technologies (ICTs) into an opportunity for the business sector and for the day-to-day life of the citizens.

The protocol signed today places the Basque Country on a par with the benchmark countries in terms of Ultrafast Broadband. The expected achievements of this action area:

- Extending the supply of ultrafast broadband services to practically all areas.
- Facilitating the availability of contents and services that require high capacity communications (broadband).

2.- For society and the socio-economic environment:

- Reducing the entry barriers to invest in ultrasfast network deployment by fostering their availability in place where it would otherwise not be possible.
- Positioning the Basque Country on a par with the benchmark countries in next generation networks.
- Driving social and economic development in the Basque Country through the multiplier effect of the ICTs in aspects such as innovation and growth (increasing competitiveness and job creation).
- Developing an innovative private-public participation innovative experience in giving momentum to the next generation broadband network that may be presented as a benchmark or good practices in the framework of the European Digital Agenda.

Last year, the Basque Government also produced, as a prior step, a study entitled "Banda Zabala+" to give momentum to the ultrafast electronic communications services (Next Generation Access Networks) in the Basque Country. That Government study laid down the first policy lines

and set the following targets for 2015:
- Promote fibre optic links in all population centres with over 100 inhabitants to enable the operators to offer next generation services to citizens throughout the territory at speeds between 30 and 100 Mbps.
- Deploy the necessary infrastructure to offer ultrafast services of 1 Gbps with professional quality in business and technological centres.
- Have state-of-the art mobile services that enable speeds of at least 30 Mbps for 90% of the residents in towns of less than 5,000 inhabitants, along with the main means of transport. This will guarantee the widespread deployment of 4G mobile services.