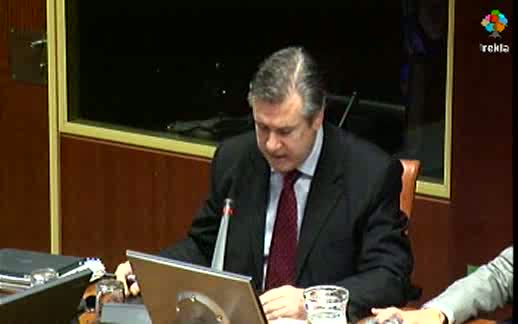 Embed video
The Basque Country to consume less energy in 2020 than in 2008 and to save 5,000 million euros on the energy bill Source: Irekia
Hide photo gallery
Show photo gallery

Bernabé Unda, the Basque Government Minister for Industry, Innovation, Trade and Tourism, today appeared, at his own request, before the Basque Parliament to outline the Basque Energy Strategy 2020 (3E2020), a document approved by the Basque Cabinet on 13 December.

The Minister, accompanied by the Deputy Minister for Industry and Energy, Xabier Garmendia, the Director for Energy and Mines, Jorge Letamendia, and the General Manager of the Basque Energy Board, José Ignacio Hormaeche, went over the main points of the plan, which has established a series of priorities for 2020.
The strategy is based on three core areas: the firm commitment to energy savings, an impetus to renewable energies and strengthening the Basque industrial sector linked to energy.

These core areas have been used to establish specific targets: The first is related with boosting energy savings and efficiency. The Strategy prepared by the Government therefore aims to consume less total energy in 2020 than in 2008 and less electricity than in 2007. These figures are based on economic growth of +28% over that period.

Energy savings will also mean that the Basque citizens will spend between 4,000 and 5,000 million euros less on energy over the ten years covered by the plan. On the other hand, energy intensity, i.e., the energy consumed in relation to the wealth produced will be cut by 22%.

To give an idea of the effort involved, one just has to remember that some 600 MV of photovoltaic panels or 300 MW in wind power generators need to be installed to increase the use of renewables by just 1%.

The third line of the 3E2020 is based on consolidate the use of natural gas as the transition energy on the way to renewables predominating. In fact, the aim is to increase the current 42% that it represents in the energy mix to 50% by 2020.
As a fourth point, the Strategy aims to continue to reduce the presence of oil, which involves reducing the final consumption of oil in 202 by 9% compared to 2010, by seeking to break its ties with the transport sector (37,100 electric vehicles) and that alternative energies will account for 15% of road transport. As a long-term target, it is even envisaged that "zero oil" can be achieved for energy uses by 2050.

The Basque Government also intends to drive the industrial-technological development of energy-linked Basque companies so that they can increase invoicing by 25%, which will involve investments to the tune of 10,701 million euros over the coming ten years.
The aim is also to give impetus to eight priority industrial and technological development areas in the energy field, and increase the turnover of the energy sector companies by 25%.

This commitment is embodied in a new differentiated policy area, Industrial and Technological Development (also known as EnergiBasque), within the 3E2020 strategy.

The sector thus has a cooperative research centre, the CIC energiGUNE, 10 corporate R&D centres specialised in energy, 5 centres run by multinationals, along with various university centres and two major Basque technological alliances, IK4 and Tecnalia with units dedicated to this area.

EnergiBasque aims to support this network of technological companies and stakeholders from the energy sector, so that it contributes to the sustainability of the Basque economy and becomes a source of wealth, employment and quality of life for the Basque Country during the coming decades.. A series of priority technological areas has therefore been defined and their common thread is electricity, as the key energy aspect.

The Energy Strategy is based on the analysis of the previous strategy, which ended in 2010 and where there was medium-high compliance of the targets set.