The Basque Country, Northern Ireland and Scotland enter into an alliance to attain recognition as benchmark regions in the health field in Europe 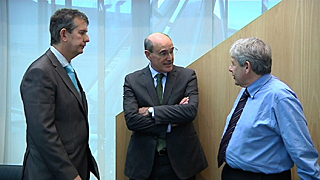 The EU considers these regions to be an example of practical health transformation based on the care of chronic disease and innovation in active ageing. According to Bengoa, "alliances between regions are fundamental to be able to exert a real influence on transforming world and European health models in order to make them more sustainable".

This morning, top executives of the Department of the Health and Consumer Affairs of the Basque Government met in Bilbao with both delegations headed by the Northern Ireland Health Minister, Edwin Poots, and the Medical Director of the Scottish National Health System, George Crooks. The meeting was an initial contact among the three entities to analyse the initiatives that are being implemented to transform their health system and study possible partnership projects

The Basque Country, Northern Ireland and Scotland are considered in the European Union as examples of response to the health needs of the population according to the demography and increase in the weight of the chronic patients. Therefore, the three regions are applying to be recognised officially as benchmarks in chronic disease and innovation in active ageing and effective transformation of the health system.

The Southern Denmark region will, foreseeably, join this process. The Basque Government's Minister for Health and Consumer Affairs, Rafael Bengoa, thus wanted to stress that "alliances between regions can play a real influence in the transformation of the world and European health models in order to make them sustainable".

Both the Irish and Scottish representative stressed the similarities between their health situation and the Basque ones, along with the challenges they are facing in the future. They all agree that care for the chronic patient, making the system efficient and guaranteeing the continuity of social and health care the necessary foundations to confront the needs of an increasingly ageing population and with greater demand for care.

They all agree on the commitment to rational management, to new technologies as support for monitoring the patients and to provide the patients themselves with more autonomy in their self-care. Another of the points discussed has been the necessary inter-sector partnership, specifically between health and industry, to find solutions to future health challenges based on innovation.

Following this initial contact, the three institutions have committed to continuing with the contacts to profile possible partnership projects, leaving the door open to other regions such as Southern Denmark, with whose Health Minister Rafael Bengoa will meet in June.