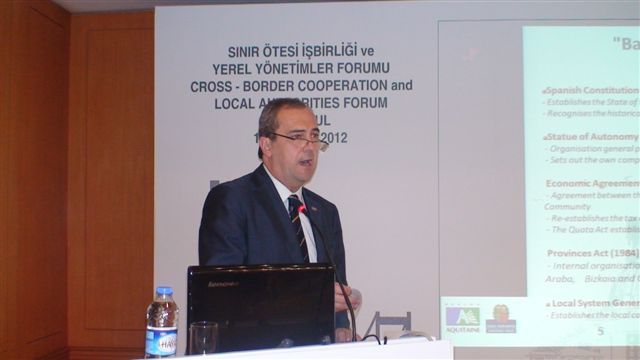 The Basque Government has presented in Istanbul the Aquitaine-Basque Euro-region as an "example of good practice" in cross-border cooperation at the "Territorial Cooperation in an Extended Europe: the Role of Local Authorities" Forum recently held in the Turkish city.

The forum was organised by the Association of European Border Regions (AEBR) and the Trakyakent region, a region in both Turkey and Bulgaria, and was attended by Turkish and Bulgarian local authorities and representatives of the Turkish Ministry for Foreign Affairs.

The Delegate for Cross-Border Cooperation, Miguel Ángel Crespo, was entrusted with describing the example of the Aquitaine-Basque Country Euro-region, along with the steps involved in setting it up and the projects currently underway. He also talked about the Basque cross-border strategy at local level, such as the Bidasoa-Txingudi Consortium and the Bayonne-San Sebastián Basque Eurocity.

During his presentation, Crespo also discussed to the cooperation in place between the French and Basque governments in the area of health and to the Euskampus project, International Campus of Excellence, where the University of the Basque Country and Bordeaux University are working together, and Bilhartean project, the outcome of the cooperation between the Gipuzkoa and Bayonne chambers of commerce.