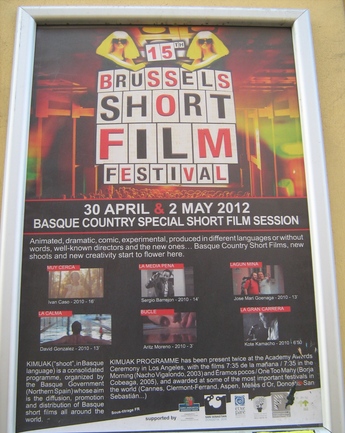 For the second year running, Basque talent and creativity is under the spotlight at the Brussels Short Film Festival. The XV Brussels Film Festival has become one of the venues to promote the Basque audiovisual sector.

The Basque participation at the Short Film Festival in the Belgian capital is one of the initiatives of the II European Cycle of Basque Talent and Culture, organised by the Etxepare Institute, in conjunction with the Basque Country Delegation to the EU, the Basque Film Library and the San Sebastián - European Capital of Culture 2016.

As the Director of the Etxepare Institute, Aizpea Goenaga, stressed in her speech at the Festival, "the Basque audiovisual sector is making its mark in Europe, thanks to initiatives such as the Kimuak programme, which the Basque Government coordinates through the Basque Film Library. Our audiovisual sector is a creative, dynamic sector that is brimming with talent, and which is already gaining recognition abroad".

The short films are being screened in two specific sessions on the Basque Country in the Festival. The 6 short films being showcased are part of the short film selection from the Kimuak programme and which features new talents and established directors of Basque short films. The following short films are being featured at the Belgian Festival: "Muy cerca" by Ivan Caso, "La media pena" by Sergio Barrejon, "Lagun Mina" by JM Goenaga, "La Calma" by David Gonzalez, "Bucle" by Aritz Moreno, along with "La Gran Carrera" by Kote Camacho.

In addition to the two specific sessions of Basque short films, the Basque contingent is likewise going to participate in the Festival initiatives to promote the professionals of the sectors among the managers of other festivals and European television channels. The Festival goers will also have the opportunity to learn more about the Basque Language and its culture.

The Basque participation at the Short Film Festival in the Belgian capital is one of the initiatives of the II European Cycle of Basque Talent and Culture, organised by the Etxepare Institute, along with the Basque Country Delegation to the EU, the Basque Film Library and the San Sebastián - European Capital of Culture 2016. The Cycle seeks to promote Basque creativity and culture, along with their creative and culture industries, through festivals and spaces in the Belgian cultural agenda.

In 2012 which is "The Basque Country 21012 - International Year in the Basque Country of the Cultures for Peace and Freedom", the II European Cycle of Basque Talent and Culture is organising different activities such as promoting the audiovisual sector, along with showcasing the Basque Language and culture, thanks to the creative leaflets on the Basque Language available from the Festival and which will be available at the travelling exhibition on the 75th Anniversary of the Bombing of Gernika. After being officially opened at the Basque Country Delegation to the EU on 26 April, the exhibition is being hosted at different institutions or cultural centre in Belgium (the Basque Country Delegation to the EU, Brussels Cervantes Institute, Liege City Hall, "Flanders Fields Museum" in Ypres, Huy National Museum). It seeks to foster and encourage discussions about the importance of historical remembrance among the different dignitaries, institutions and citizens who visit the exhibition, which will ensure that the exhibition is a living and interactive space.

The II European Cycle of Basque Talent and Culture is one of the Basque Government initiatives to promote Basque culture abroad.