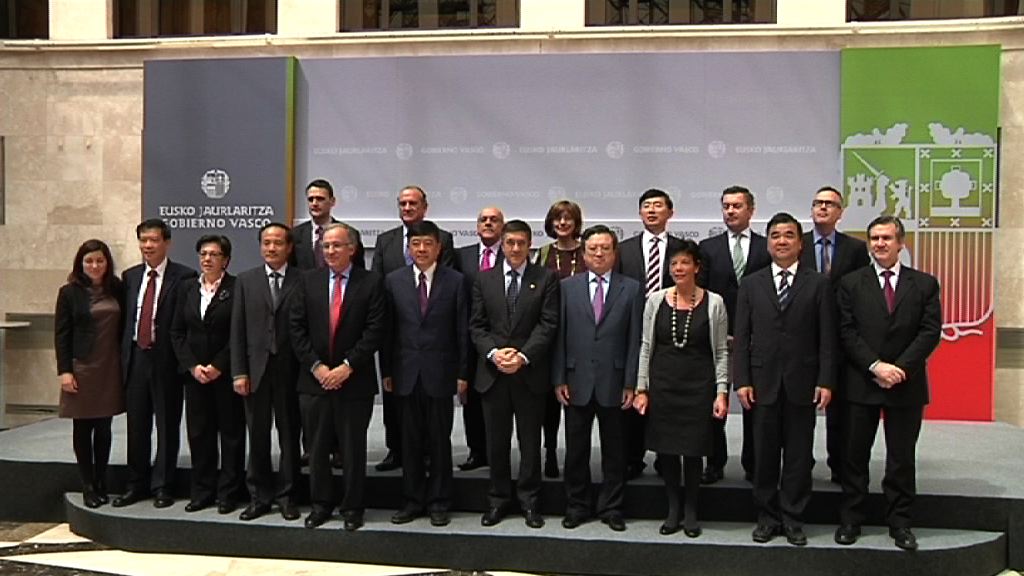 The agreement, signed today by the Lehendakari and Vice-Governor Xu Ming, fosters mutual collaboration in a dozen areas.

The Basque Government and the Chinese province of Jiangsu today signed an agreement between the Basque Country and the Chinese province of Jiangsu to regulate the partnership between both parties in a dozen areas. The agreement was signed by Lehendakari Patxi López, the Basque Premier, and the Vice-Governor of Jiangsu, Xu M, who has travelled to the Basque Country accompanied by an official delegation. This collaboration agreement establishes "a partnership agreement that will lead to future agreements," stressed the Lehendakari, Patxi López. "We have planted seeds which may grow to huge things and of great interest for both regions and establish the foundations for future relations," he concluded.

The agreement is the outcome of the Lehendakari's institutional and trade mission to China in October 2010. Since that visit by the Basque delegation, the Basque Country and Jiangsu have been working together, leading to several Basque companies setting up in that important Chinese province. Indeed, both regions have highly developed technological and logistic infrastructures, along with common strategic sectors.

Specifically, the agreement signed today, which will last for 5 years and can be extended, aims to enable cooperation areas that go beyond the strictly business, in areas of trade, science and technology, energy, agriculture, culture, education, environment, employment and social affairs.

In each of these areas, the text of the agreement sets out the commitment by both parties to organise collaboration and experience exchanges in order to seek prosperous joint development.

It will thus drive the setting up of platforms to be used by the companies of both regions as support when participating in local commercial activities, such as trade fairs, seminars, presentations and negotiations; it will enable the exchange of results and of technical and scientific staff between entities and companies that develop R&D&i projects, and it will facilitate the collaboration between higher educational institutions, along with the exchange and lecturers.

The agreement will likewise enable the cooperation between associations and companies from the tourist sector in order to exploit the markets and develop tourist products, in addition to promoting both regions as a cutting-edge tourist destination. As far as the environment is concerned, the pooling of experiences and good practices regarding the fight against climate change, managing water and preparing sustainable development strategies is envisaged.

All the actions envisaged in this Friendly Relations Agreement will be organised and coordinated through the Foreign Affairs Office of the Jiangsu Government and the General Secretariat for Foreign Affairs of the Basque Government.