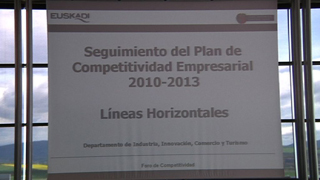 The Plan has managed to consolidate exports, tourism and investment in R&D despite the poor employment figures. For the first time ever, a Competitiveness Plan has been put forward to be assessed and compared in order to correct and improve the performance of the Government. The exporting level of our companies, investment in R&D and the record-breaking tourism figures in the Basque Country are the most positive indexes. The degree of compliance of the targets of the Competitiveness Plan is 91%, after analysing the assessment indicators.

The Basque Country is in second place in the ranking of the 30 European benchmark regions that head the indicators in the economic, social and environmental arenas. As far as the economic aspect is concerned, the Basque Country is in first place among the 30 regions and in eighth place among all the 206 European regions. It includes data such as the per capita GDP or the disposable personal income, while with respect to the environmental and social aspects, the community is in the middle of the ranking: in 15th place among the 30 benchmark regions and in 127th place out of all the European regions. The final performance indicator, which includes the two concepts, shows that the Basque Country is second place out of the 30 benchmark regions, only behind North Westfalia (Germany), while it is in 14th place out of the 206 European regions.

The 30 benchmark regions include Catalonia, Navarra (in Spain), Piamonte, Emilia Romana (Italy), Baden Wurttenberg (Germany), West Midlands (Great Britain), Rhone-Alpes (France), or Salzburg (Austria). The study takes into account variables such as technological and industrial specialisation, along with the sectoral structure of its economic or also the size, demographics and its location.

The exporter level of Basque companies, the investment in R&D and the record-breaking levels of tourism in the Basque Country are the positive indexes that were highlighted in the first assessment of the Business Competitiveness Plan 2010-1013 and which have been showcased today. On the negative side, due to the economic downturn dating back to 2008, is employment.

The Business Competitiveness Plan, approved nearly two years ago, is the great economic commitment of the Government, to the point that it directly involves nine out of the ten Basque Government ministries, and will have mobilised over 11,800 million euros, 60% of which will come from the companies, by 2013. It seeks to foster the internationalisation of Basque companies, innovation and sustainability, as the real business opportunity.

The ambitious project does not seek to change the production structure, as was the case of the 1980s with the industrial restructuring, without implementing changes in the existing companies. Therefore, the spotlight is on the companies and the aim is to drive the entrepreneurial spirit, cooperation, quality or degree of openness abroad.
The Basque Government's Minister for Industry, Innovation, Trade and Tourism, Bernabé Unda, today stressed at the Álava Technology Park that, despite the international financial crisis, the Basque Country is riding the storm both in terms of the work index and the investment in innovation index.

"The Basque Country is currently the Autonomous Community with the lowest unemployment rate in Spain, despite having the highest average wage. Our current unemployment rate is half of the one during the previous economic crisis in the 1980s and 1990s. Today we must analyse what we do and what we must do. The aim is not to make do. It is about contributing, assessing and if it is necessary correcting and changing," explained Bernabé Unda.

For the first time ever, a Competitiveness Plan has been put forward to be assessed and compared in order to correct and improve the performance of the Government, the first of its kind in the Basque Country.

The compliance level of the targets set out in the Business Competitiveness Plan, once the data with the relevant indicators had been analysed, stands at 91%.

- Open Economy: the Basque position is good in terms of the open economy given that, bar one, all the indicators are over the target. With regard to exports, in 2011, a maximum was achieved, exceeding the 21,000 million euros, which implies that it is higher than the values reached in 2008. Furthermore, the exporter performances (exports/GDP) stood at levels over 30%. All the records in terms of inbound tourism have been broken, with the growth in the terms of foreign tourists being particularly significant.

During the meeting of the Open Economy Table, around 25 experts discussed the future in areas such as internationalisation or tourism.

There was consensus about providing more aid to SMEs for their internationalisation and it was proposed to develop a long-term global model, where training of their own employees and those from abroad must be fundamental. Furthermore, emphasis was placed on the need to simplify the bureaucratic procedures for the workers of the foreign companies that set up

- Technologically advanced, Entrepreneurial and Innovative Economy: The Basque Country continues to be strongly committed to innovation and technological development as a source of competitiveness, even though the final results in variables such as employment, creating jobs or increasing the GDP are masked by the economic situation. Spending on R&D in the GDP increased by 6.12%. Spending on R&D in companies increased by 3.9% and the percentage of the population with higher education grew by 28.5%.

The participants that worked on the core area of a technologically advanced, entrepreneurial and innovative economy, apart for acknowledging the work and commitment of the Department for Industry, Innovation, Trade and Tourism, unanimously coincided about the importance of this core area, one of the most important areas to turn the economy around.

There is a need for a greater emphasis on some aspects to achieve a more forward-looking, entrepreneurial, technological and innovative Basque Country. First of all, the size of the companies to support their innovation projects. Second, the need for a more far-reaching approach to the sector, as technology is closely identified with some specific cases and other are making real efforts. And finally, there was a call to open up innovation to other aspects such services and processes, and management, including marketing and sales, the real and comprehensive running of the company, thus avoiding only being focused on the product. They agreed that these innovation lines have generated greater competitiveness. Demands to focus on all sectors are already included in the Technology, Innovation and Science Plan 2015.

On the other hand, there was a call for commitment to training and to our talent, and for an emphasis on the integration of PhDs in companies to give value added to the quality and competitiveness on our production sector. With regard to entrepreneurship and intrapreneurism, there was a call for greater guidance in the early stages and greater coordination with the other institutions, working that is already underway through the Basque Entrepreneurship Service.

- Sustainable Economy: The three economic sustainability indicators - GDP per capita (97.28%), GDP per person employed (95.39%) and productivity per employed person for EU-27 base 100 (98.20%) - have fallen slightly in 2010 real data with respect to the targets set by the Plan for that year. The two social sustainability indicators - human development index (100%) and life expectancy at birth (100%) - just meet the set target. And the two environmental sustainability indicators - greenhouse gases (-) and energy intensity (97.14%) - require longer period to reach any valid conclusion.
The roundtable discussing the sustainable economy expressed favourable opinions regarding the developing of policies that retain basic aspects of the Welfare State (employment, underprivileged sectors, etc.) and referred to the fight against job absenteeism.

Similarly, and the Basque Country is an example in this context, it was decided that maintaining the weight of the industrial production in the GDP is necessary for economic growth to occur, without overlooking the importance of services, training and the need to support SMEs and technological research. Innovation continues to be the basic concept for competitiveness.

On the other hand, with respect to energy sustainability, the conclusion of the Basque Energy Strategy 3E2020 to reduce oil dependency to zero over 40 years was assessed, and the importance of green economies and reducing CO2 emissions as a factor to foster competitiveness was stressed.

- Horizontal axis: The Basque Country is highly dependent on the national market despite the endeavour abroad. However, it is true that we have evolved in a different way than other regions of Spain. The economy has been focused with its sights on foreign markets, which has enable it to better ride out the crisis than other neighbouring economies. On the other hand, investment in 3R&D has been rising and spending on R&D stands at 2.08%.

With regard to this core area, the participants at the roundtable stressed areas such as funding. They therefore supported the extraordinary measures implemented by the Government with the financial entities, and have asked that Basque SMEs be made aware of the details of this initiative.

They also called for Euskalit to oversee the excellence processes of the small and medium-sized companies, along with dedicated support regarding intellectual property, above all in relation to patents.

They also stressed the importance of the Basque Country improving in the culture of marketing to enhance the presentation of its products, support for expatriates, the need to continue to provide advice on R&D and financing, along with the key role of public-private partnership in all aspects.