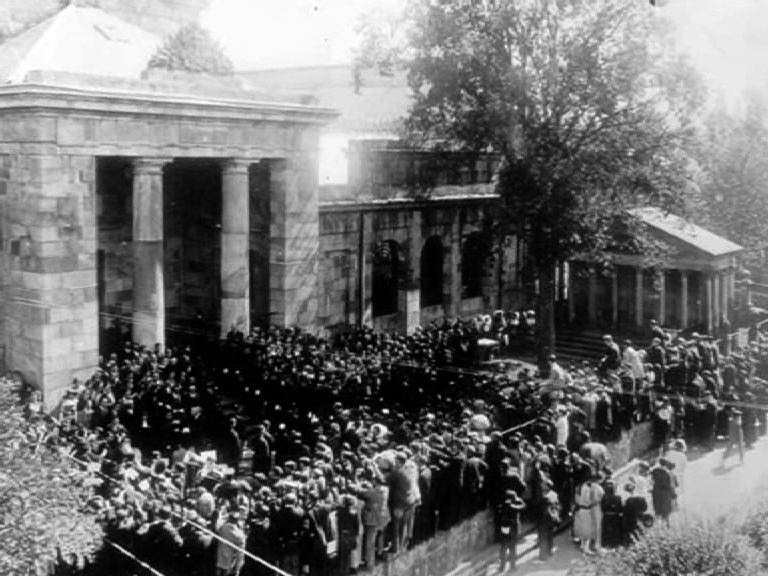 A travelling exhibition will visit 50 cities to cast the spotlight on what happened in the town of Gernika (Bizkaia) in 1937 and further discredit violence and terrorism.

Guillermo Echenique, the General Secretary for Foreign Affairs, and Iratxe Momoitio, Director of the Gernika Peace Museum, have presented at the Lehendakaritza, the seat of Basque Country, the six travelling exhibitions on the Bombing of Gernika that are going to be opened in Brussels, Buenos Aires, Santiago de Chile, Bogota, Mexico and New York on 26 April.

In his speech, Echenique explained that this initiative was part of the foreign policy of the Government, as a commitment of the Basque Country to discredit violence and terrorism around the world. "The Basque contribution to discrediting violence and terrorism is among the commitments in our foreign policy programme". This Government put an end to a period of foreign policy aimed at seeking solidarity and backing for sovereignty projects and opened up a stage aimed at internationalising the country overall and put the spotlight on the real image of the Basque Country, the image of the best of the Basque Country. The Basque Delegations abroad are proving to be a fundamental and essential tool to achieve this," he stressed.

The 75th anniversary of the Bombing of Gernika by the German and Italian forces, Franco's allies of the Civil War, is the moment chosen to "remember the past, remember that dramatic moment and those that we have subsequently experience with the terror of ETA," said Echenique.

The Basque Government delegations abroad are thus going to be the setting to open the six travelling exhibitions that will visit different countries, looking for the backing of its institutions and of the collectives of victims of war, dictatorships or terrorism.

The Director of the Gernika Peace Museum Foundation, Iratxe Momoitio, explained that the exhibitions consist of 20 large panels with images of the bombing, at the same time as they try to involve the viewer in the values of peace and democrary.

When selecting the venues to host these exhibitions, the emphasis has been on choosing places and collectives that are particularly significant for the defence of human right. Special mention should be made of the Belgian city of Ypres, which was devastated during World War II, the tragic setting of the ESMA in Buenos Aires, now the Space for Remembrance, or the Museum of Remembrance and Human Rights in Santiago de Chile.

Collectives such as the Grandmothers and Mothers of the Plaza de Mayo, Niños de la Guerra/Children of the Spanish Civil War, Basque collectives abroad, representatives of human rights collectives are also going to take part in the exhibitions, along with institutional representatives such as the mayors of Montevideo, Bogota, Cuenca (Ecuador) or Brasilia, or figures of the ilk of Isabel Allende and Ambassaor Alejandro Negrín, the General Director of Human Rights and Democracy of the Mexican Secretariat of Foreign Affairs.

The exhibitions will be opened by the Basque delegates in the respective countries and there will be speeches as significant as those by the Niños de la Guerra, including Jose Luis Vidaller in Argentina, Agnes Alonso, a War Child who arrived in Chile onboard the Winnipeg, or Nile Ordorika, who currently lives in Mexico and witnessed the bombing.